Woven metals according to DPA

In line with the architecture projects, DPA has been conducting important research on materials throughout many years, for example its early development of the metallic meshes. For nearly 20 years, DPA worked in close collaboration with manufacturers. New types of weaving and specific technologies for implementing were created, increasing the textile applications of metallic meshes, e.g. façade clothing, technical fabrics, interior covers, filters, etc. All these uses have enriched the vocabulary and the experience of space.
06 | 09 | 2011

Details of the metallic mesh on the Arganzuela footbridge

The stuff of heroes 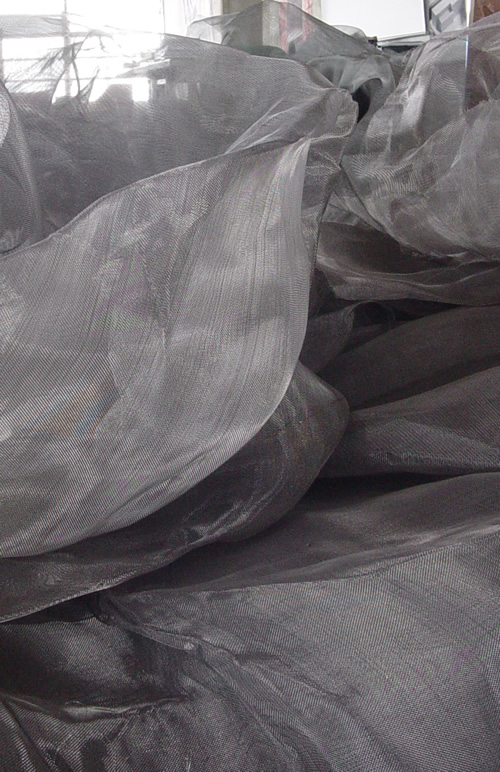 The development of metallic fabrics for architecture and design

By Stephan Kufferath, director at GKD 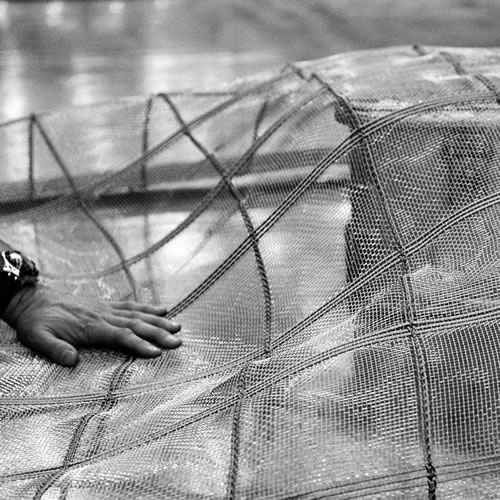 "In 1992 GKD – a leading weaver of woven metals with manufacturing units in Germany, the USA, Spain and South Africa – established a first contact with Dominique Perrault endeavoring to assist this famous as well as innovative architect in his interest and research on woven metals for use in architecture, particularly focusing on the interior design of the Bibliothèque nationale de France. On previous projects Perrault had already worked with synthetic fabrics, but for the Library only non- inflammable materials, such as metallic fabrics, could be accepted. Interesting technical aspects of stainless steel meshes were discovered, such as resistance, durability, rigidity under tension, maintenance, acoustic qualities, etc. Metallic fabrics often solve several functional problems at once, problems that the architect would otherwise have to deal with one by one. In addition to these purely functional aspects, design questions and aesthetics came more and more into play: the mesh’s light reflection properties, the silk-like elegance of the material, the variable semi-transparency, and the GKD-specific ability to weave these fabrics in extra-large pieces, up to 8 meters wide. Dominique Perrault was led to comment: “These large fabrics interested us as a new architectural idiom, finally freeing us from the need to use large numbers of discrete modular elements. With these large pieces of fabric, we obtained surfaces that could be hung wall-to-wall, wall-to-ceiling, unified and seamless. This underscored the architecture, creating places that are, metaphorically speaking, hollowed out, continuous, unassembled. An architecture of sculptured masses.” The discussions we had with Dominique Perrault from the very beginning of our joint work and research gave us a completely new vision of our product, and at the same time set us new technical challenges. Wire-weaving companies are used to dealing with very tight tolerances; precision with regard to mesh size, wire diameters, flatness of the fabric, are standard requirements of such industrial clients as automobile makers, aircraft companies, the food industry and the like. Perrault’s approach was different: he wanted to stress the liveliness and irregularity of woven fabric. Consequently, Perrault guided us towards product modifications corresponding to architectural requirements. During many months of very close and intense interactive testing, Perrault and GKD experimented with many different mesh sizes, wire shapes, wire diameters, cables and threads in order to endow, as Perrault said, “the meshes with a form, a design in the manner of fashion designers.” The first test work that GKD carried out for Dominique Perrault was not in the Library, but in the Archives départementales de la Mayenne in Laval, France. Perrault designed a huge curved ceiling-to-wall application which is still cited today as a prime example of the optimum use of metallic fabrics in buildings. After that we concentrated on the ceilings of the Bibliothèque nationale de France, which resulted in various type of ceiling, undulating or taut, made from different mesh types for a dozen different applications in the building. Starting with this, GKD has answered the demands of various other architects and projects in all parts of the world. This proves that the basic research work initiated by Dominique Perrault was going in the right direction. The more we continue our research, the more we discover further technical, functional and aesthetic characteristics in the product. This confirms our opinion that metallic fabrics in architecture will be around for much longer than if they were a mere fashion trend. Our work with Dominique Perrault has continued with his enormous Olympic projects in Berlin. The approach here has been completely different. To spread a giant table cloth over two tables in a garden, while at the same time giving them the light-reflecting quality of water in a lake, was difficult for us to imagine at first. These projects displayed Perrault’s incredible creativity and imagination once again. We followed him technically, but only really understood when we saw the fantastic result. At present GKD is working with Dominique Perrault on several new projects. Perrault never copies anything from the past; he seeks to go further, but in a different direction. We are happy to think that thus far we have only gone a few steps along the road which stretches before us.”
AA.VV , With,  Barcelona-Basel, ACTAR / Birkhäuser 1999.