chargement
SUIVANT
Andrew Ferren
"The Madrid Waterfront: Who Knew?", New York Times
June 2011
"Would it be unpatriotic to assert that the Big Dig in Boston was small potatoes compared with Madrid Rio? The pharaonically scaled waterfront revitalization that opened on April 15 is rapidly shifting Madrid’s recreational axis from Retiro Park to the once-forgotten western edge.
Who knew Madrid even had a river? Unlike Seville or Bilbao, whose early fortunes were inextricably linked to their waterways, Madrid began as a hilltop fortress that conveniently had a little river, the Manzanares, winding lazily through the plain below (to the west of the Royal Palace, which stands on the site of the fortress). But for decades, not even the royal family could claim a water view, as the river was choked by two ribbons of the M-30 freeway, which rings the city. It took just seven years for the Madrid Rio project to go from conception to inauguration. Four miles of the six- to eight-lane M-30 were tunneled underground and the land above was reborn as a picturesque 300-acre riverside park. [...]
Reuniting the city center with its southwestern neighborhoods (area real estate prices have skyrocketed accordingly), the park’s 33 bridges range from Renaissance-era to right now. The time warp is nowhere more visible than at the early-18th-century Puente de Toledo. Its harmonious rhythm of arches and curved bulwarks is echoed just a bit farther downstream in the corkscrew-shaped cylinder of steel designed by Dominique Perrault for the Puente de Arganzuela, the new bridge that is rapidly becoming Madrid Rio’s most popular photo backdrop. [...]
Taking in the scene, Ana Martinez, a local architect who has worked with both private and municipal clients, said that unlike the new sports arena La Caja Mágica and other recent public projects that require admission tickets, “the river park is something that anyone in the city can enjoy every single day of the year.”
client Madrid City Council, Madrid, Spain
architect Dominique Perrault Architecture, Paris, France
engineering MC2 / Julio Martínez Calzón, Madrid (stucture); TYPSA, Madrid (mechanical engineering)
location Parque de la Arganzuela, 28045, Madrid, Spain
site area 10 ha
built area footbridge 150 m (section 1) 128 m (section 2) length, 5 to 12 m width
beginning of conceptual design February 2005
beginning of construction February 2010
inauguration 24 March 2011 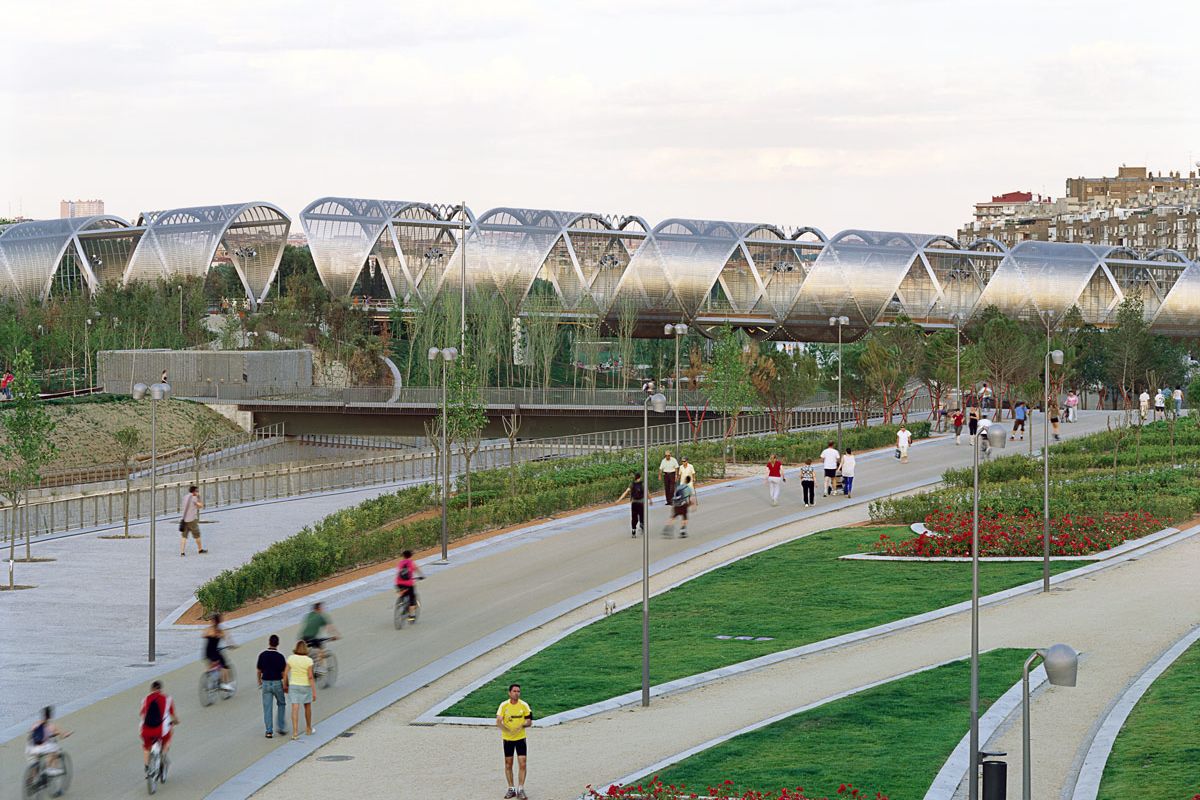