chargement
SUIVANT
Dominique Perrault, July 2015
The Pont de Sèvres Towers, renamed Citylights following a complete re-structuring, were built in 1975 by architects Badani and Roux-Dorlut. Bearing witness to the era’s architectural modernity, they stood high and dense in the midst of a barren urban territory. The re-structuring turned this sense of “isolation” into an asset, on a socio-economic as well as an urban level. The project we conducted is a renovation, re-structuring and an unveiling of the towers’ self-evident resources.
The site is now very well connected to the public transport system, with a métro stop right outside the building, and the Grand Paris network, whose stations are now all connected to the Pont de Sèvres Towers, placing them at the heart of the city. The towers are therefore an integral part of Paris’s recent expansion towards Grand Paris. In addition to their strong territorial impact, these elements have transformed the buildings’ morphology and mutation.
An open, sheltered campus
While the towers were originally cut off from their environment, they are now entirely and organically linked to it, through a grid of pedestrian routes connecting them to the new Trapèze district. There, the wasteland of the former Renault factories has now been replaced by office and residential buildings, both new and refurbished.
We conceived a range of spaces in order to open the project to the outside: a large plaza in front of the towers, passageways on the sides, and gardens. The project is now physically anchored in the city. The 53,000 square feet space that was created on the ground level connects the towers to their environment and roots them into the urban space of the city. With the reception areas, walkways and communal spaces, we are offering a new type of work environment, fit for today’s world.
An unveiling process
The decision to rehabilitate large architectural projects such as this one is based on a contemporary logic steeped in efficiency and reality. These projects possess undeniable design and geometrical qualities. The hexagonal floor plan, for instance, with its central core serving floors of offices, offers 360° views of Paris and its Western suburbs. All of the work spaces receive direct daylight, and the open offices are narrow so that no more than twelve people are ever visible from any given point. The architecture of the buildings is denser than it would be, had they been conceived nowadays. Our goal with this project therefore consisted in unveiling these assets.
With their prism-like shapes, the buildings are very efficient when it comes to capturing light. Just like with optical instruments, the traditional opposition between the north and south faces of the buildings no longer applies. Sunlight shines throughout the buildings and reflects on the crystallized facades so that all offices can benefit from it, whichever face of the building they are on. This urban complex forms a prow at the entrance of the city of Boulogne, which can be seen from the highway down the hill of Meudon.
The rehabilitation process of the Pont de Sèvres Towers, while respecting their historic value, allowed for a thoroughly new structure, in line with current norms and new sustainable development performances. The name Citylights, chosen by the project management, is a perfect description of the gleaming “bracelets” of the buildings, whose lighting will be specially conceived to make them shine bright in the night sky. Light gleams on every level of the towers, in the work spaces, dining areas, auditorium and on the campus which opens out to the city below. Citylights is a luminous tower, a beacon into the city in which it is now anchored.
client, promoter SAS des Tours du Pont de Sèvres

Program
Intern and extern rehabilitation of the Pont de Sèvres Towers
• demolition and reconstruction of the base,
• remodeling of the hall, the lobby and the auditorium,
• reorganization of all the levels,
• substitution of the former façade,
• creation of connexion floors which link the towers and which reorganize the pedestrian mobility. 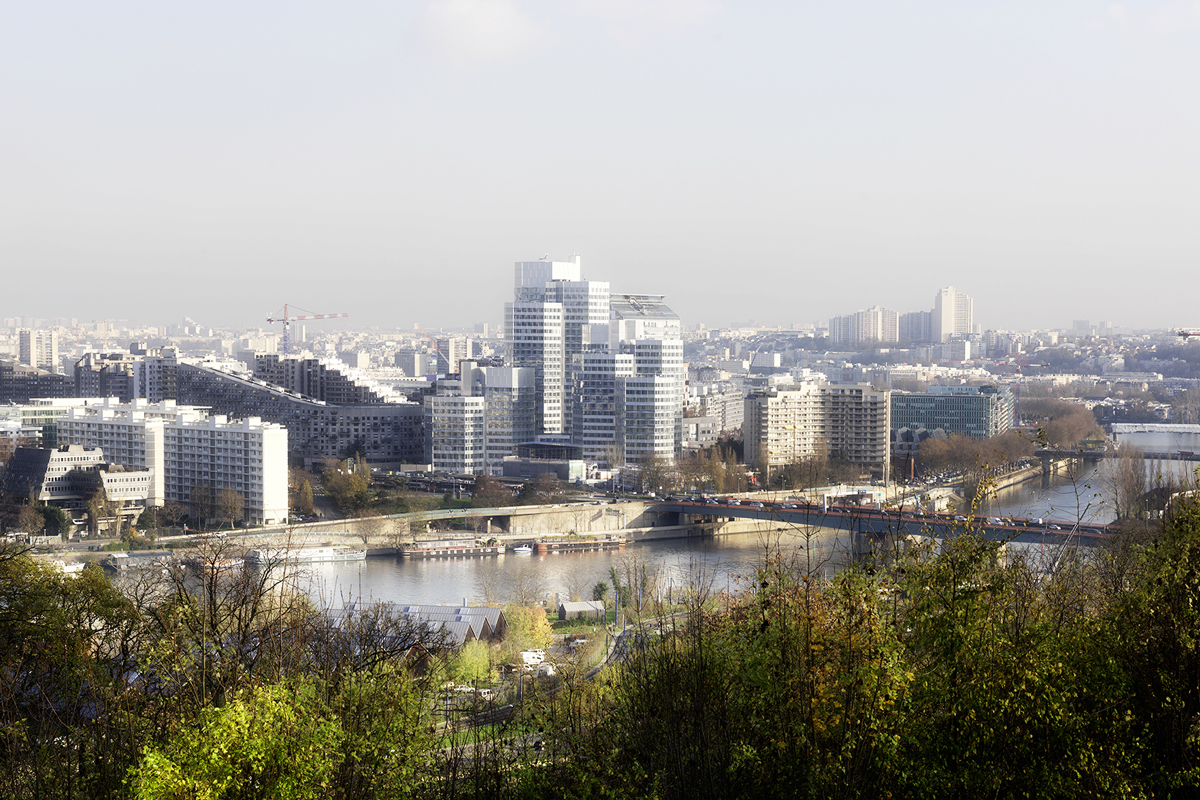