chargement
SUIVANT
Excerpts from the press release / EPFL / 04.02.11
"The project to transform the former mechanical engineering halls and the central library of EPFL has been awarded to the Karl Steiner company. The architect is Dominique Perrault, who was responsible for France’s National Library, among other works. This building will house, in particular, the Center for Neuroprosthetics, which was launched at the end of 2008 and co-financed by the Bertarelli Foundation, the Defitech Foundation, the International Foundation for Research into Paraplegia (IRP) and the Sandoz Family Foundation. […]
The budget for this project will be partly covered by the credit of 67 million Swiss francs accorded by the Federal Parliament at the end of 2009. […] The project will enable the regrouping of part of the central services of the school, and the creation of several new laboratories intended for the students of the School of Engineering. The Center for Neuroprosthetics, which was started at the end of 2008, and is supported by several foundations […] will thus benefit from a dedicated and perfectly equipped location.
“The winning project convinced us because it establishes a strong link between the older buildings on the campus and the new constructions on the South side of the campus”, explains Francis-Luc Perret, Vice-President of EPFL, responsible for real estate and president of the jury. The architect has created a new, dynamic space, halfway between the Rolex Learning Center and the Center of Congress under construction on the North side.
In a second stage, a rather unusual building, the highest on the campus, may be constructed just up from the Avenue Piccard, which crosses the site from South to North. Dubbed the “Teaching Bridge” by the architect, this structure – subject to the availability of funding – will house several levels of buildings intended for teaching. “As well as giving back life and coherence to what is rather an oddly conceived passage, this new space dedicated to training puts the emphasis on the modern pedagogical forms that our school wishes to promote”, concludes Francis-Luc Perret, who is pleased to note that the architect has integrated in his reasoning a genuine urbanistic reflection “that creates a new dynamic at the heart of the campus”
design-build project with Steiner SA
• architect Dominique Perrault Architecture
• engineering Felix construction (facades), Tecnoservice (CVC) Duchein SA (sanitary system), Daniel Willi SA (structure)

New Mechanics hall (ME) for the Ecole... 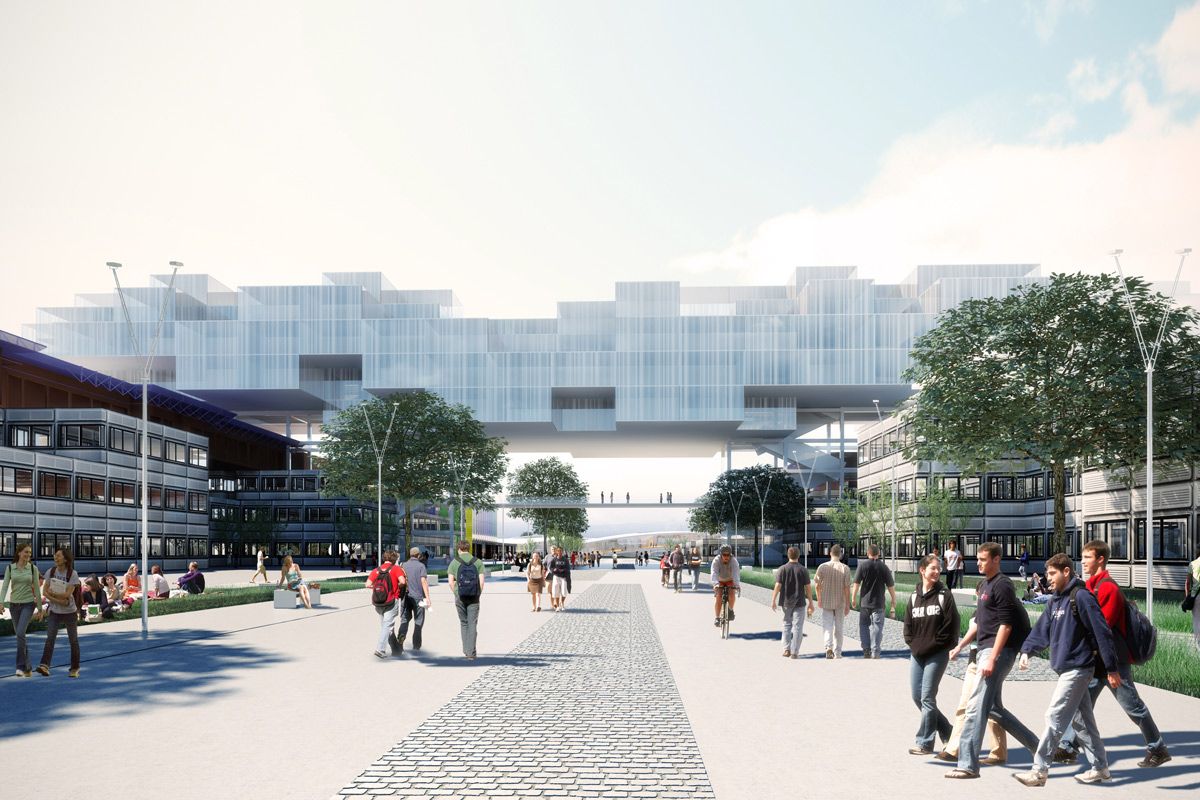