chargement
SUIVANT
In the perspective of 2016 Olympics, the City of Madrid has started to reinforce its sports facilities. Despite the failure of the Spanish capital's candidacy, the Olympic Tennis Centre hosts since 2009 one of the most prestigious tournament on clay: the Madrid Tennis Open.

With a plot area of 16.5 hectares (40.77 acres), the site is located on a former slum housing area, previously a wasteland in the middle of a busy motorway and train network. The 100,000 square metre (1,07 million sq ft) built project includes the “magic box” with three indoor /outdoor courts with covered area for 20,000 spectators (12,000, 5,000 and 3,000 respectively), 16 outdoor courts, five courts with a covered area for 350 spectators each, six practice courts, a pool, headquarters for the Madrid Tennis Federation, a tennis school, clubhouse, press centre, stadium boxes and other private areas and restaurants. Built areas, made of steel, aluminium, concrete and glass, are organized around a vast artificial lake over which volumes of varying sizes are scattered, like islands or fragments of nature beckoning strollers. A system of footbridges opens numerous paths through these volumes, offering spectacular new perspectives and connecting the magic box with the San Fermin neighbourhood and the Manzanares river Park designed by Ricardo Bofill. The “magic box”design superimposes two worlds.

Inside, the tennis arenas are adapted to the different uses of the complex. The roofs of the three indoor/outdoor courts are giant mobile slabs mounted on hydraulic jacks, which serve to partially or totally open the three roofs to allow for passage of air and sunlight or close them to avoid exposure to the rain or other hazardous weather conditions. The three aluminium clad roofs together provide a combination of 27 different opening positions. The roof of the central court, which measures 102 x 70 m and which weighs some 1,200 tons, can have a vertical opening reach of up to 20 m while the horizontal opening can slide as much as its width. Both the smaller stadiums roofs measure around 60 x 40 m and can open vertically up to 25 degrees.

They can also slide horizontally, leaving the inside of the stadiums completely open to the sky. The movements of the roofs on the scale of the immense structure throw a giant living shadow onto the landscape. Even in the worst weather conditions, Madrid’s Olympic Tennis Centre can hold a minimum of three simultaneous matches, the only tennis premises in the world to offer such flexibility. This versatility allows it not only to celebrate almost any kind of sports meeting, but also a significant number of other events, such as concerts, political meetings, fashion shows, etc. Perrault’s signature, metallic mesh, which envelops the “magic box” filters, is reflective or opaque, depending on the time of the day. In daylight, it shimmers. At night, light radiates from within, signalling the events underway inside. A special mesh design has been newly developed for this project. The size of the metal mesh panels of the main building (25 m high by 7.20m wide) is also pioneering and has never been manufactured. The new iconic landmark is endowed with a large park, above the water level, allowing it to be a public space to be used by pedestrians day or night, whether or not competitions are being held. The area, which will have parking for 3,200 cars, is linked to the Madrid cycle Ring routes and has an underground station within a five minute walking distance. The architecture of the “magic box” changes the configuration of the city, standing as a powerful signal, permanent new landmark, and a new entrance.
location Parque del Manzanares
competition June 2002
start of conceptual design July 2002
construction start April 2006
completion 2009
site area 165 000 m²
built-up area 80 000 m²
client Ciudad de Madrid
partner DPA Espagne
engineers
Perrault Projets, Paris : architectural engineering
LKS, Madrid : project management
TYPSA, Madrid : structure and installations 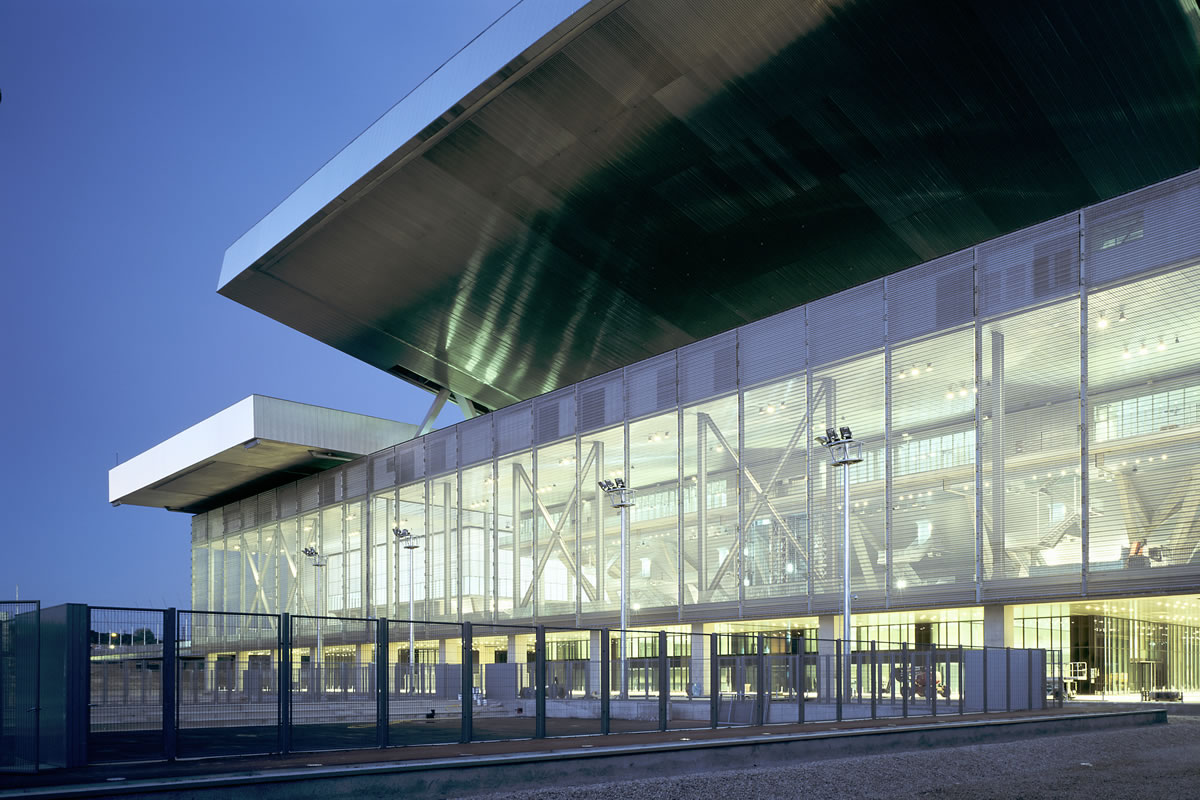