chargement
SUIVANT
Sebastian Redecke
“Cycling-stadium, Berlin”, Domus n°812
February 1999
"The decision by the German parliament in 1991 to make Berlin the capital of the newly-united country was immediately followed by a headlong series of events. Alongside the far-reaching planning decisions for the central district of Berlin, with a government quarter and new traffic concepts, the city council also made an ambitious bid to host the Olympic Games in the year 2000. […]
Perrault’s Berlin sports buildings are unique in the city if for no other reason than that they are largely underground. The plot consists of an almost square plateau ten hectares in extent, which has been planted haphazardly with 450 decorative apple-trees […]
Between the trees of this “orchard”, planted on a uniform lawn, beyond a steep slope the sports complex itself appears, in the form of two almost totally buried buildings - one, round, houses the Velodrome, and the other: rectangular: the Swimming Baths. The highest point of the roofs of the two halls is only one meter higher than the apple-tree plateau, which in turn, is depending on standpoint, two to five meters above the level of the street. This means that passers-by have an extremely shallow-angle view of the flat roof surfaces. These surfaces are closed, and formed from hundreds of narrow-mesh steel mats mounted on a steel frame. They give rise to remarkable optical effects which vary according to the weather. In glary sunshine the mats appear silvery and sparkling. Especially when viewed from an aeroplane coming in to land at Tegel Airport, they present a spectacular picture full of riddles. The large round shape of the Velodrome rises unmistakably out of the surrounding sea of houses like a glittering jewel. At night, in the view of the architect, they exude a whole variety of different lights, giving rise to a magic atmosphere. Stronger illumination could in fact actually produce the impression.
The low edges of the two buildings, which rise out of the slopes of the platform with it semicircular footpaths and narrow ditch, were each provided with a broad continuous window, above which are more steel-mat claddings. Perrault’s architecture, since his Bibliothèque Nationale de France, would be unthinkable without these mats. They are appropriated to his “semi-finished” aesthetic, which neither wants sophisticated detail nor needs high-tech-fin-and-games, but in general prefers standardized industrial products, which are then assembled in simple fashion. Perrault’s language is abstract. Facades with simple surface textures form for him, in spite of their dimensions, only the background to what becomes an important space enclosed by his architecture. […]
The service and utilities concept must be seen as a further special feature of the total complex. Perrault decided on a broad, roofed “street” alongside the city railway which runs parallel to the plot. This concourse provided perfect access to the sports complex. On the south side of this “street” passers-by will also be able to look into the foyers and the swimming baths through large glass façade. […]
Perrault has kept faith with his design ideas in Berlin. Even though quite different functional demands had to be fulfilled here, the basic idea of concealing large parts of the building, as in the Bibliothèque Nationale de Paris and his much smaller conference center in Saint-Germain-en-Laye, has been preserved. The theme is reticence and concealment – followed by surprise at the size of the whole thing, the imposing sequence of rooms and the paucity of materials. Important sports buildings are usually distinguished by standing alone. Instead of a highly visible symbol, Perrault by contrast had a different idea: a park full of apple-trees, accessible to all, urbane yet artificial in its effect, and at its center two huge, inaccessible steel boxes. The leitmotif in his projects is always the landscape in the very broadest sense of the word, interpreted and staged in a large gesture. The traditional essence of architecture, the visual presence, is only of secondary importance. This could provide material for debate; it could even meet with incomprehension. Irrespective of the fact that we shall have to wait a long time before the complex is integrated into the very hetero generous and – in many parts – desolate urban environment, we can at least hope that this unusual grove with no actual middle will not be ignored or despised, but – as beneath the plateau – will become a new “place” in Berlin, one full of life.”
client City of Berlin, represented by OSB Sportstättenbauten GmbHarchitecte Dominique Perrault Architecte, Paris ; APP (Architects Perrault & Partners), Berlin ; Rolf Reichert, Munichpartners APP Architects Perrault and Partners, Rolf Reichert – RPM, SSP - Schmidt, Schicketanz & Partnerconsultants Perrault Projets (architectural engineering), PROMOS projektmanagement Olympiasportdtätten (project management), Ove Arup & Partners Ltd. London et Berlin (structure and fluids), IBUS Institut für Bau, Umwelt und Solartechnik GmbH, IPB Frauenhofer Institut für Bauphysik (construction physics), Jean-Paul Lamoureux (acoustics and lighting), Landschaft Planen & Bauen (landscaping), Weidleplan Consulting GmbH, Architekt Kerschkamp (sports facilities consultant), Éric Jacobsen (agricultural engineer)location Landsberger Allee, Berlin, Germanysite area 10 ha
built area 53.780 m² (velodrome : 29.800 m², swiming pool : 23.980 m²)built volume 809.816 m³ (velodrome : 452.701 m³, swiming pool : 357.115 m³)beginning of conceptual design 1992beginning of construction velodrome : June 1993, swimming pool : June 1995construction period velodrome : 4 years and 3 months, swimming pool : 4 years and 5 monthsprogramMulti-use velodrome (29,800 m²): cycling, athletics, tennis, equestrianism, sports education, concerts (11,420 spectators, 5,583 seats); pool (23,980 m²): 2 Olympic pools, Olympic diving platform, pools for diving training, handicapped, children (4,200 spectators, 2,136 seats); multisport hall.

Velodrome and Olympic swimming pool - The... 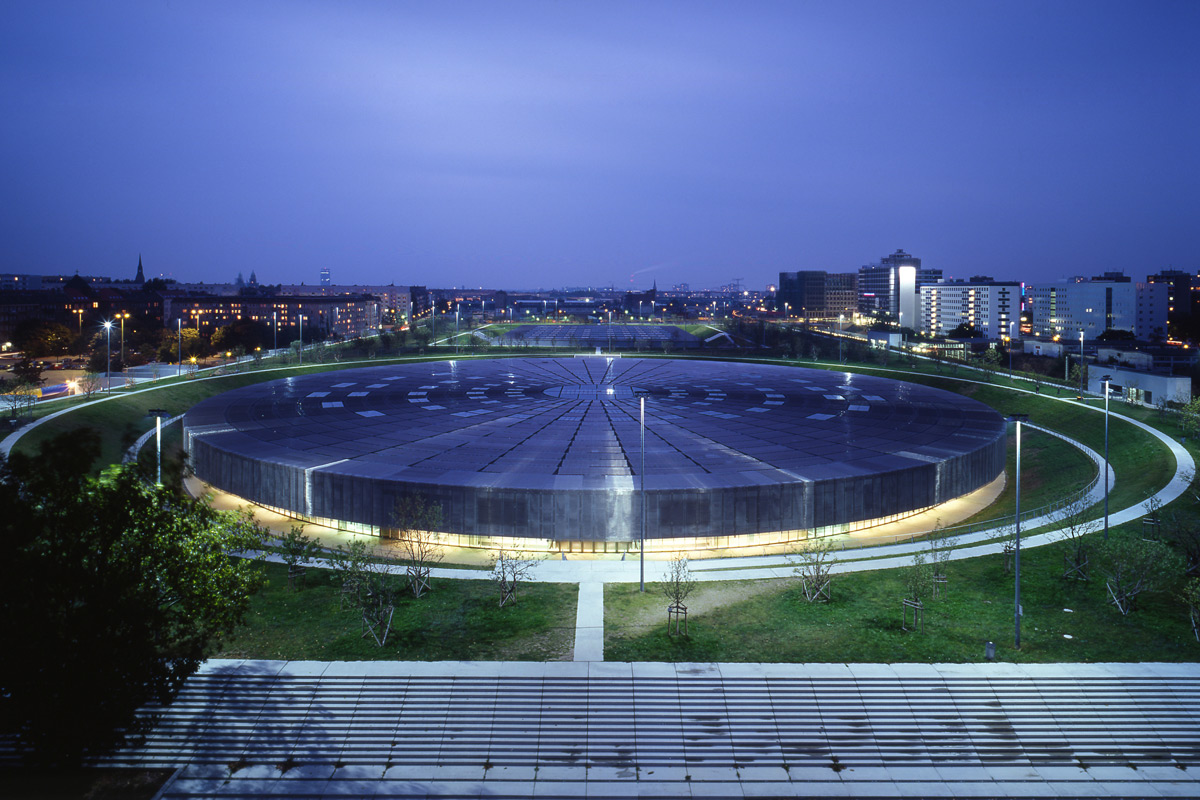