chargement
SUIVANT
Galeristes is an event envisioned as a new type of contemporary art fair, which advocates in favor of “another art world”. In the manifesto that marked the inception of the event in 2016, its founders, which were two collectors, expressed their wish to create a space that would answer to the needs of gallerists and the lay public who may not be entirely satisfied with the current landscape of the art market.
Galeristes allows French galleries, or those with a strong relationship with France, which feature a singular and original identity, to be known to the lay public. For the public, the event aims at favoring conviviality, exchanges and a pedagogic approach, in both the discovery of the work of a gallerist, as in the initiation to the pleasures of collecting.
The main objective of Galeristes is to create a place in which amateurs and gallerists can establish authentic connections through artworks.
Since its first edition, the scenography of this event has been designed by Dominique Perrault and Gaëlle Lauriot-Prévost.
The fourth edition of Galeristes gathered 40 exhibitors in the great hall of the Carreau du Temple in Paris. Occupying 1800 m2, the scenography is conceived as the antithesis of the “white cube”: by adopting a language at the crossroads between the office space and the storeroom, it favors a more relaxed approach of the works and a direct interaction between visitors and exhibitors.
A modular scenography
The scenography is composed of an ensemble of modules inspired by industrial design, which can be adapted to better fulfill the needs of the gallerists.
There are five types of modules, all with the same dimensions: 1,50 m long, 3 m height, and 70 cm depth. Each module is a variation of the same element, depending on the required use: shelves, alcove, storeroom, library or display wall.
A new itinerary
This fourth edition of the Salon proposes two itineraries. The first occupies the central space of the great hall and allows visiting freely each gallery.
The second itinerary, titled “Anthology of French Art”, is located on the periphery of the great hall. It gathers fifteen small exhibitions by French artists. This new section was created with a new module designed as more “museum-like”. It is a variation of the original module, but twice as large (3m x 3m) and it includes a white surface.
A “zero waste” scenography
After each edition, all elements of the scenography, from the metallic shelves to the lighting elements and the flooring, are disassembled and stored, to be assembled again the next year. The modular aspect of the elements and their solidity are in line with a desire of sustainability of the Galeristes Salon. The architects thus integrated to the design process the wish to facilitate the stages of mounting and storing, as well as the possibility of reusing all elements.
In the words of Dominique Perrault and Gaëlle Lauriot-Prévost:
“Our project for the fair design began with a discussion around the fact that an art gallery can be quite an intimidating space. The ‘white cube’ effect, if you will, can hold an inexperienced visitor back.
We thus decided to create the conditions for another experience, a promenade, and conceived modular industrial elements such as metal shelves, which each gallery can arrange in a personalized way to display artworks. Our design is flexible so that to adapt to all the exhibitors, allowing them to fill 5 or 10 modules if they wish. Each year, the visitor’s course changes depending on the number and size of the participating galleries, but it is always based on these same modules. The industrial design that we have conceived is both noticeable enough to inhabit the space and neutral enough to not ruin our vision or discovery of artworks. (…)
As mentioned before, the idea was also to give the visitor the impression of sneaking into the storeroom of a gallery, in order to create a sense of proximity or get to know art more simply, more directly.”
Press release 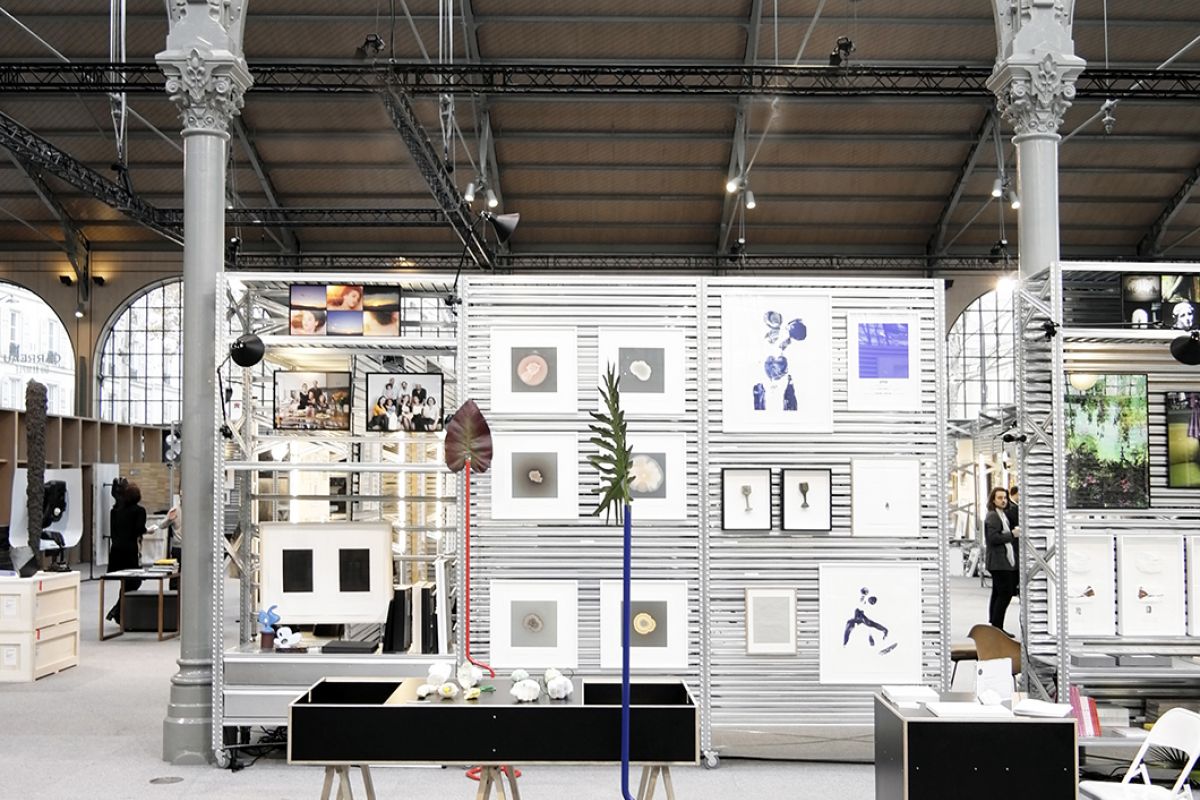