chargement
SUIVANT
The exhibition design is an original layouts designed by Dominique Perrault and Gaëlle Lauriot-Prévost, followed by Frédéric Migayrou, scientific director of the exhibition.
An open path
The exhibition design echoes the architecture of the building and its elements of furniture; it invites visitors to follow a free and immersive path. Disclosing the volume of Gallery 2, it does not include any partition but leaves the columns visible to generate rhythm in the area. It relies on the architectural elements of the library and sequences the 750 square metres available in four cells corresponding to the thematic sections of the exhibition path outlined by strips of metal mesh. Here made of aluminium while of stainless steel in the rest of the building, the mesh is an emblematic element of the BnF architecture. Five strips of coiled mesh (14 X 4 metres) are suspended 2,20 metres above the floor. They let the gallery opened, with no partition; they sequence the area and allow the light to come in with transparent effects. 80 chairs of the library are placed all over the exhibition area. Some of them are the original ones, made of wood. The other ones are new, made of wood and metal; in the long-term, they will be the only ones used in the BnF reading rooms. Randomly placed in the area, these chairs form some kind of a low cloth all over the surface. Visitors are free to sit on them to discover the videos.
An immersive visit
Four screens – 6.85 x 4 meteres each – are settled in each cell, at the center of the exhibition area. Of a scale in line with the space, they can be seen from both sides and contribute to the immersive effect. The thematic films projected and made by Richard Copans invite the visitors to grasp the monumental aspect of the BnF, its inclusion in the territory, the size of the garden as well as the Library’s elements of furniture. As visual accounts without words, they show original and outstanding images of the building taken by a drone flying over the garden or the neighbourhood. The light projected by the screens is reflected by meshes and creates a very special atmosphere made of light variations and transparency. The twilight connected to a minimalist soundscape further reinforces the visitor’s immersion in the space and history of the building.
A documentary wandering
A series of wood showcases, lit from above, is arranged in the exhibition area. Each of them presents various documents and objects as well as a choice of video excerpts to listen to individually with headphones.  A picture rail on the side wall illustrates each thematic section through graphic materials never presented before. For example, the first section dedicated to the architectural object is the opportunity to discover some sketches, study drawings and plates presented for the international architecture competition in 1989.
The exhibition Dominique Perrault - The Bibliothèque nationale de France. Portrait of a project 1988-1998 opens the doors of the architect’s studio and allows visitors to discover the creation process that gave birth to the François-Mitterrand Library. On the premises of the Bibliothèque nationale de France, the exhibition presents to the general public, for the first time ever, the history of the design of this building that has become a monument; it also accounts for the numerous aspects of the creation and building process. In 2018, the Research Library (Rez-de-jardin level) will celebrate the 20th anniversary of its full public opening. This year, it is also the 30th anniversary of the speech made by François Mitterrand on 14 July 1988; freshly reelected for his second term in office, the then President of the French Republic put forward his desire to offer the Nation a new national library.Imagined and designed by the architect and his staff, the exhibition is divided in four thematic sections. First two parts present the architectural object and its inclusion within the territory as a milestone of the urban development visible today. The third part focuses on the emblematic void that the architect wished to place at the heart of his project, namely the garden or the creation of a real piece of forest near the Seine river. The last part of the exhibition plunges visitors into the details of indoor facilities and furniture especially conceived for the place.The major part of documents, presented for the first time, belong to Dominique Perrault’s archives. A few other pieces are part of the public collections of the Centre Pompidou and the FRAC Centre. A wide variety of documents will be presented to visitors: sketches, technical drawings, slides and ektachromes, photomontages, digital or handmade perspectives, study and competition models on various scales, samples of materials, prototypes, etc. These documents were made in a pivotal period for architecture and construction, at the junction of a manual precision work and the early days of computer assisted design. For instance, all the documents created for the competiton were hand-drawn whereas digital tools were introduced during the project’s development, until the end of the work. This collection of archives shows how important the building site was.

The opening of the exhibition "La... 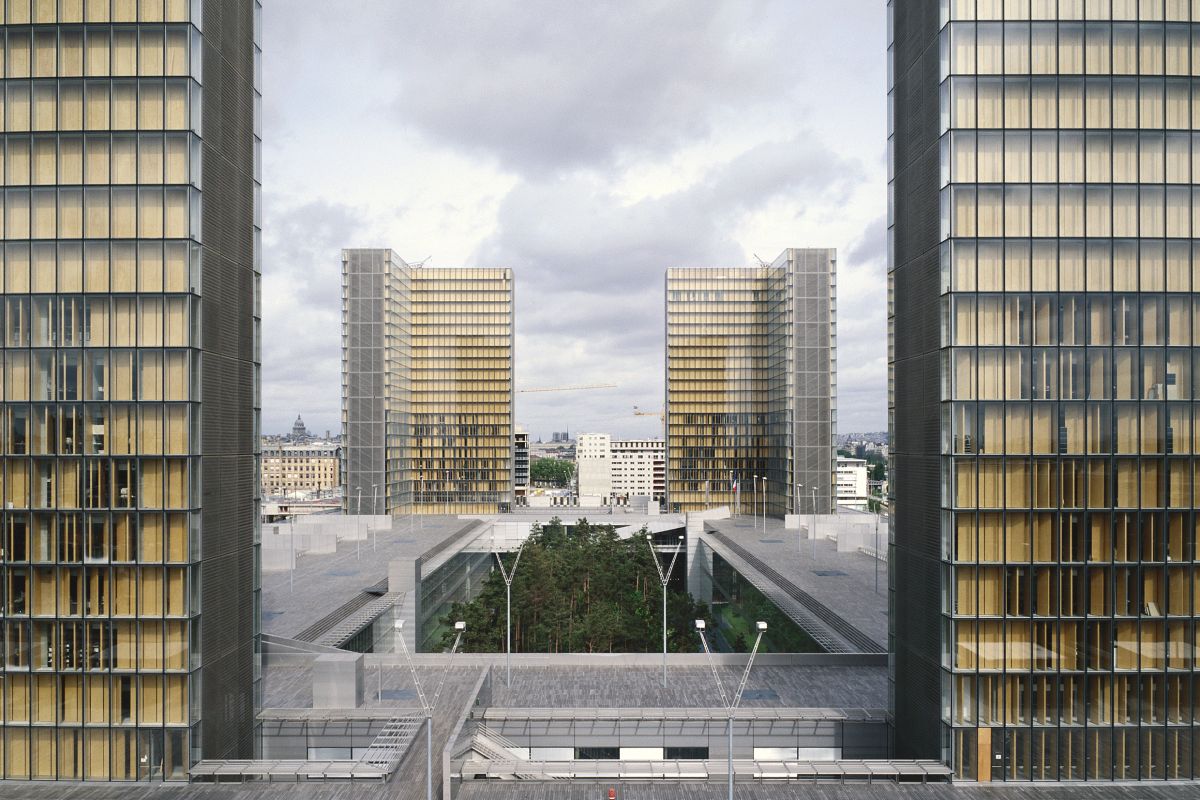