chargement
SUIVANT
To celebrate the 25th anniversary of the call for projects of the great extension of the European Court of Justice, an exhibition presents for the first time, inside the Court, the history of the construction of this emblematic building and the simultaneous development of the Kirchberg plateau.
History of a place
Inaugurated on January 9th, 1973, the original building of the Court of Justice, designed by Jean-Paul Conzemius (with Francis Jamagne and Michel Van der Elst [Belgium], at a time when the European Community had only six founding members), had three successive extensions. The latter, inaugurated in 1988 (12 countries), 1993 and 1994 (15 countries), were designed by the Luxembourg-based architects Bohdan Paczowski (1930 – 2017) and Paul Fritsch.
Since 1996, in anticipation of the broadening the European Community (27 countries nowadays), a new mission is assigned to the team led by Dominique Perrault in collaboration with the Luxembourg firms Paczowski & Fritsch and M3 architects to build a fourth and Great extension, capable of multiplying by three the area of the Court, from 50,000 to 150,000 m2.
Since then, the following extensions form a unified, coherent and functional ensemble, which echo the city of Luxembourg with their slender silhouette, merging density and lightness. The soaring construction pursues its development until 2019, with the opening of a third tower, which accompanies the plateau that has become an integral element of the city.
The exhibition attests to the singular history of an emblematic building that evolves and gives birth to a neighborhood in close relation to the construction of the European Union.
Through an original scenography designed by Dominique Perrault and Gaëlle Lauriot-Prévost, the exhibition retraces, from 1957 to 2020, a creation process that was punctuated by the formation of the European Union.
It is organized in three sections that allow grasping the close interaction between the architectural history of the Court of Justice of the European Union and the urban development of the Kirchberg plateau.
These creation processes – at the scale of the architecture and of the city – also reflect the construction of the European Union. On the ground floor, on both sides of the straight staircase, are presented two linear itineraries composed of a succession of big luminous cases, accompanied by a few models. The first one depicts chronologically the urban development of the Kirchberg territory, which evolved from an agricultural plateau to a connected neighborhood. A second parallel itinerary examines the architectural history of the Court of Justice, according to its main themes: the Palace, the ring, the courtrooms, the towers, the gallery…
In the upper floor, organized under the volutes of the chandelier in the hall, the third section of the exhibition features models and drawings, distributed in thematic clusters.
The exhibitions allows discovering an ensemble of unpublished models and documents, including sketches, details of interior designs, materials and furniture, which were especially designed for the place. These documents belong to the archives of the firm Dominique Perrault Architecture, to associate architect Paul Fritsch, to the CJEU, to the LAM Lëtzebuerger Architektur Museum and to the Urban Development Fund of the Kirchberg plateau.
Exhibition : “Spirit of Laws, Genius Loci : The Time of an Architectural Masterpiece.
To Build a Courthouse for the European Union”
Court of Justice of the European Union, Luxembourg
Inauguration: September 18th, 2019
Press release (French) 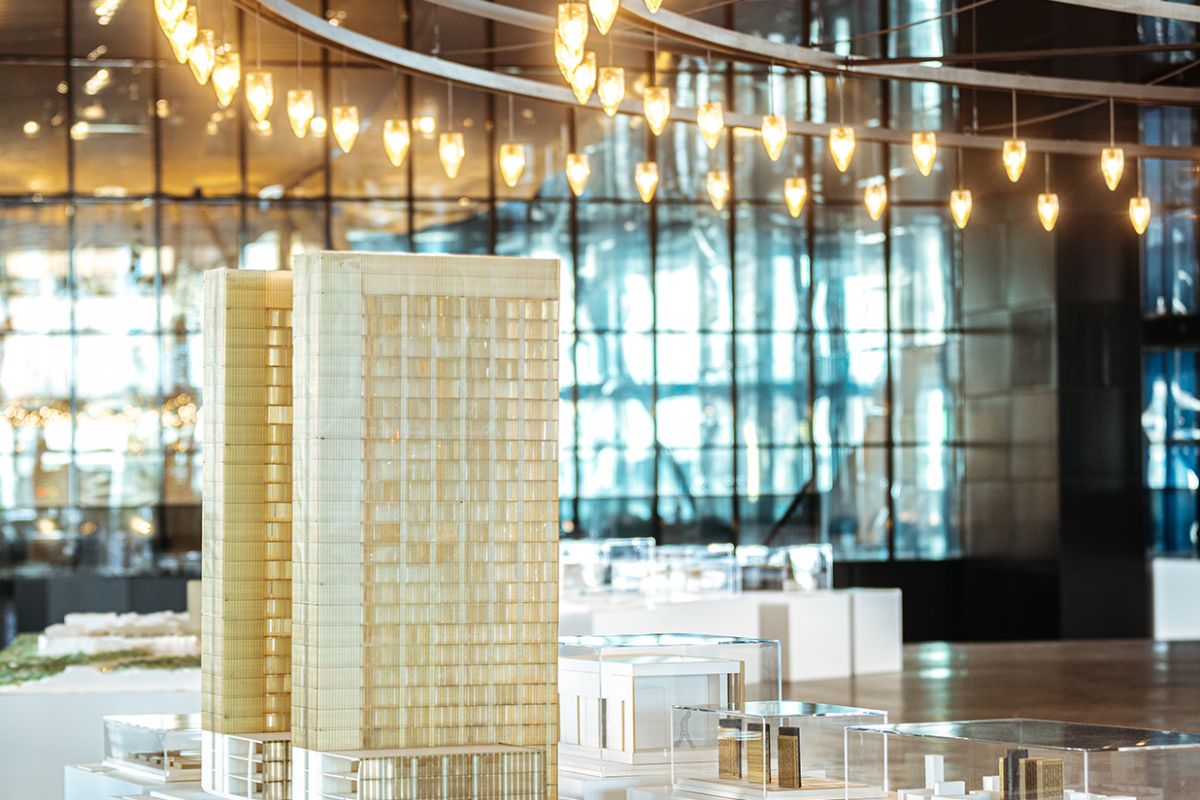