chargement
SUIVANT
Excerpt from the text of the competition,
June 1989
"A square for Paris | A Library for France
An initiatory place and not some monster of a building, part-temple and part-supermarket. A place of reference for the East End of Paris. A place that is part and parcel of the continuity of the sequence of large empty spaces along the Seine, like the place de la Concorde, the Champ de Mars, and the Invalides. In this way the site beside the Seine becomes one of major importance with the activation of this place; the hill in the I3th arrondissement gives on to the Seine, and turns its back on the disgrace of the sad Porte de Choisy and Porte d'Ivry highrise tower-blocks. In an operation designed to save and redeem the place, the institution introduces its generosity, while the Bibliothèque de France contributes its influence and radiance. With this combination of a free and open space, built to the scale of the capital, and horizontality, the Bibliothèque de France unfurls its breadth and volume by way of its four "beacon" -like markers, akin to tension-rods or braces for the flat area between them, offering a verticality that defines a virtual volume, which, in turn, crystallizes all the magic, presence and poetry of the complex.

A magic place
This project is a pièce of urban art, a minimalist installation, the "less is more" of emotion, where objects and the materials of which they are made count for nothing without the lights which transcend them. Towers, case - or sheath -like structures of glass, with a double skin and sun filters which multiply the ref lections and highlights, and magnify the shadows: the absolute magic of the diffraction of light by means of these crystalline prisms. Nature offset, with a garden where ail you see is the foliage of the trees. "A sea of trees, a froth of leaves". An initiatory walk across footbridges slung among the branches of the trees, somewhere between sky and earth. Last of ail, the soft protection of undergrowth, with its aromas and rustling sounds, reunions with oneself, and with another world. Night vision: the Bibliothèque de France will be set in a halo of light, emanating from the garden and the service periphery. A diaphanous light will rise up through the interiors of the glass towers, culminating in four topmost points, which will shimmer like four lighthouse beacons. This liquid light will spread over the square, while the towers will be reflected in the Seine."
Dominique Perrault
client Ministry of Culture of France
architect Dominique Perrault Architecte, Paris
engineerig Perrault Associés SA (architectural engineering), Séchaud & Bossuyt (structure), HGM Guy Huguet SA (centralized technical management), Syseca (security and telecommunications), Technip Seri Construction (fluids), Pieffet, Corbin and Tomasina (economy), ACV (acoustics), Éric Jacobsen (Sauveterre) (agricultural engineer)
location Quai François Mauriac, 75013 Paris, France
site area 65 300 m²
built area 365 178 m²
built volume 1 500 000 m³
landscape 10 782 m², 250 trees (oak trees, wild pine trees, birches)
esplanade 58 811 m²
beginning of conceptual design August 1989
beginning of construction 23 March 1992
construction period 3 years

20th anniversary of the public opening of...

The French National Library is 20! 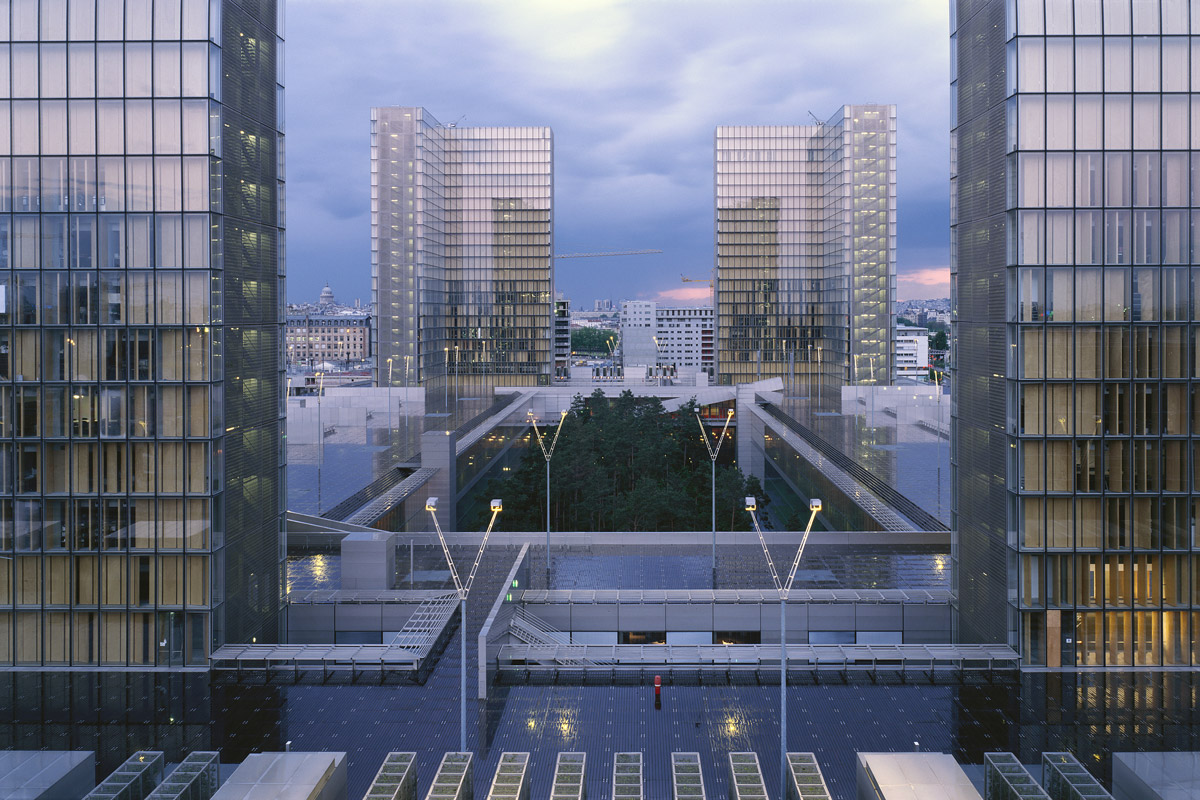